Written by katandmouse on June 29, 2012. Posted in Boundaries, Personal Empowerment. Leave a Comment

I was on my group mastermind Q&A call recently and one of the group members was in the Hot Seat receiving excellent coaching to her question. When the call was over I saw her post a comment in our Facebook group that she “felt bad” because she thought she’d taken up too much time during the call. While I appreciate her humility (because there are people who can self-servingly TAKE extra time) her well-intentioned comment struck me as a “knee-jerk” response. I know, because it’s a pattern and knee-jerk response for me.

Too often I hear women use responses like “I’m sorry” and “oh that’s OK” and “I feel bad” and do you know why? Because somewhere deep down we feel like we don’t deserve “it” or we feel guilty receiving it.

Sometimes we don’t even use these words to describe the knee-jerk feelings underneath because the pattern is so engrained in us as women. The Los Angeles Police Department (LAPD) has a motto: to Serve and Protect. Sometimes I think women have unconsciously adapted this motto to be: to Serve and Deny. As women we have grown up learning that we are “good” when we serve others and often learn to “deny” ourselves because otherwise we are selfish. If we do allow ourselves something, we often qualify it by saying ‘I deserve it’ as if we need to justify it to ourselves. I know you know what I’m talking about. These beliefs are powerful forces in our culture and believe me when I say it is a learned behavior.

Now, rather than ask ‘where or how did I learn it’ I like the question, “How do I un-learn it?” because feeling bad about things truly does NOT support you. It is interesting information in that it teaches you that having more resourceful thoughts, behaviors and actions does support you. Like anything you want to change, you must become aware that it is happening, when it is happening and how it impacts you.

Reflection: Taking charge of your life is a process. Applaud yourself on what a great human being you are and how you are striving to make your life better and better every day, it will begin to counteract the self-criticism. There is a fine line between humility and criticism.

How I got an Epiphany from the Mother of Dragons

Written by katandmouse on June 15, 2012. Posted in Boundaries, Personal Empowerment. Leave a Comment

I love it when I have epiphanies and I had a couple in the last few days; like a series of little solar LED yard lights that come on one after another as the sun begins to set. 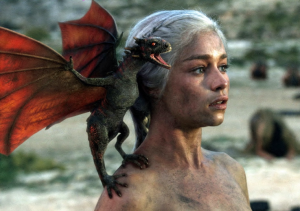 I started watching a cable show called Game of Thrones. It’s full of warring violence and sex, so typical of cable shows but every once in a while one of the characters makes it all worth watching. Daenerys (pronounced sort of like Den Air E S) is one of those worthwhile characters and central to the story. She is of royal lineage and her brother marries her off to a tribal clan leader in trade for the clan leader’s army in hopes of reclaiming his throne. During the early part of their marriage Daenerys comes into possession of 3 dragon eggs (yes this is fantasy). By the close of season one Daenerys’s brother is killed by her husband who also later dies. Mourning her husband’s loss (her brother was a real creep) she takes her 3 dragon eggs and walks into a fire-storm expecting to also die. Instead she hatches the baby dragons and arises from the ashes with them. She becomes known as the Mother of Dragons.

Daenerys is a beauty and a force to reckon with that most everyone underestimates because she is so quiet about it. At the end of season two, which was just this last week, Daenerys’s dragon children are stolen from her and she courageously goes on the hunt for her “children” as any good mother would. She finds herself in a mysterious alternate world of magic and illusion and is challenged by power-hungry men who want her dragons for their own greedy use. Without batting a gorgeous eyelash Daenerys again does the unexpected. She intuitively connects to her inner strength and power, defeats the dragon-nappers by silently unleashing her own magic and frees herself leaving the bad men burning in her wake. She then serenely and majestically confronts the architect of the dragon-napping, and graciously thanks him for teaching her such a valuable lesson then calmly locks him in a vault to die and leaves with her dragons and subjects. Whoa, what a woman!

Daenerys embodies a “don’t mess with the mother of dragons” power in a completely non-confrontational way. This activated my “you go girl-Take Charge of your life” feeling that I teach my students and continually grow in my own life. She exhibited a presence of confidence and certainty that triggered my own breakthrough. Watching this woman stand in her own truth and certainty inspired me to tap into my own conviction which has been conspicuously absent since the death of my life and business partner, 18 months ago. Although I’ve known it for many years intellectually, I made the mind/heart connection on a new level and consciously realized I AM strong, passionate, wise and in my own power. Daenerys inspired and reminded me of what I love so much to do; teaching other women how to reclaim their inner power and take charge of their life in a non-confrontational manner. I finally connected to the rays of hope, confidence and certainty as they pierced the veil of my constant grief. I felt the shift. It doesn’t mean I won’t revisit that sad and lonely place of grief again; that’s a human feeling and expressive of such a deep and vast loss. It does give me hope though that I won’t stay there forever. Like Daenerys, I feel like I’ve emerged from a fire-storm and am re-birthing myself and it’s very painful at times and very empowering at others.

Thank you Daenerys for reminding me of what I’ve known down deep and finally reconnected to consciously: my own self-possessed inner strength and courage. I look forward to practicing it more every day and teaching those who are ready to connect to theirs in a quietly powerful way.